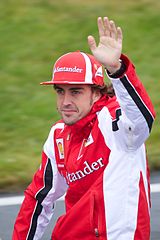 Following Fernando Alonso’s win in China, we believe at least three or four drivers could now realistically win the 2013 Formula One Championship.

Anyone who has taken offense to Sebastian Vettel’s new bad boy attitude or his apparent disrespect for teammate Mark Webber, must have taken a little satisfaction in Sundays result.

Both Alonso in first and Kimi Raikkonen who finished second are looking very strong for the season ahead, each known for their outstanding consistency.

Having seen in recent seasons what the Spanish driver can do with a slightly second rate car, in what seems to be a much improved Ferrari for 2013 Alonso will be tough to beat.

Whether or not Lewis Hamilton who took third in China can become a realistic contender for the title will depend on how Mercedes are able to develop the car as the season progresses.

We’ll have to wait and see how much focus the German team puts into this years car before switching their attention to 2014 with it’s new regulations.

Though triple F1 champ Vettel will remain the bookies favorite for now, it’s reassuring to see 2013 won’t be a one horse race.