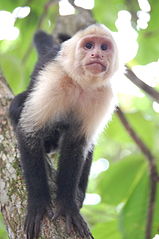 Question: What is the name of Justin Bieber’s pet monkey?

Answer: The name of the Justin’s pet monkey, which is believed to have been a birthday present for his 19th, is Mally.

More specifically, Mally is a White-Faced Capuchin Monkey. In the wild Capuchin’s are usually found in the rainforests of Central America and the most northern regions of South America.

Capuchin monkeys like Mally belong to the Cebidae family and are considered to be extremely intelligent animals.

As a result of this they are becoming increasing popular as pets and are frequently being used to appear in movies and television shows, particularly in the US.