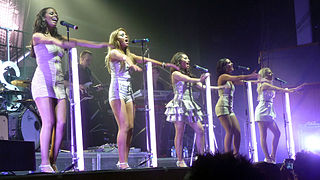 The Saturdays – photo by Martin Jewkes

Question: Where are The Saturdays girls from and what are their accents?

Answer: The girls who feature on the E! reality show ‘Chasing The Saturdays’ are from the United Kingdom and Ireland.

Vanessa White was born in Yeovil in the South West of England which would normally give her a Somerset accent except Vanessa moved to London at the age of five.

Perhaps The Saturdays member with the most distinct accent though is Una Healy who was born and grew up in County Tipperary in The Republic of Ireland. Obviously as a result Una speaks with a rather attractive Irish accent.

When not in America or abroad elsewhere on tour, the girls generally remain based in the UK.