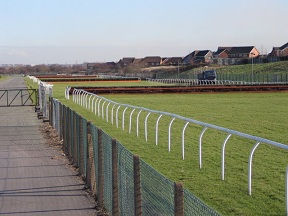 Aintree Racecourse – Photo by Roger May

Question: Where is the Grand National horse race held?

Answer: Since the first ever race way back in 1839, the National Hunt race has been held at Aintree Racecourse.

The steeplechase course is located in the North West of England in Aintree, Merseyside, near Liverpool.

First opened in 1829 and now owned by Jockey Club Racecourses, Aintree will once again play host to the Grand National in 2013.

With it’s notoriously high fences such as Becher’s Brook, the 4 1/2 mile course is considered one of the most demanding in all of horse racing.