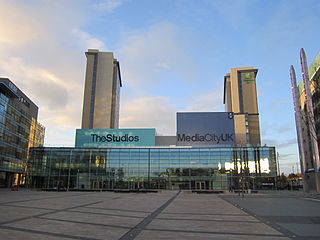 Question: Where do they film and broadcast The Voice UK from?

Answer: The blind auditions for The Voice which is broadcast on BBC One is filmed at The Studios, MediaCityUK located in Manchester, England.

The location for this years live shows is Pinewood Studios in Slough with the earlier Battle Rounds coming from Fountain Studios in London.

The MediaCityUK studio buildings which are operated by dock 10 are part of The Quays, in Salford, Trafford Wharf, Trafford, Greater Manchester.

The complex is located near the Old Trafford football stadium, home of Premier League side Manchester United.

The blind audition episodes of The Voice often feature footage filmed outside MediaCityUK, as the contestants arrive ready to perform.

In addition to The Voice UK, many other TV and radio shows are recorded at The Studios, MediaCityUK.