Question: Who is Rihanna currently dating in 2013?

Answer: Despite the couple having not spent a lot of time together recently, Rihanna is still reportedly dating her once former boyfriend, Chris Brown.

Rihanna has been busy in recent weeks with her tour while Brown has been working hard himself promoting his latest album. 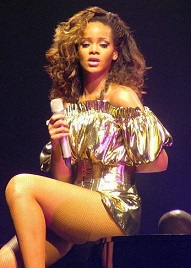 Rihanna – Photo from Chris B & MyCanon

As usual, during their time apart sections of the media have been speculating on their relationship and other potential partners.

However judging by the more credible news reports and sources, Rihanna and Chris are still together and in fact preparing to perform together.

According to MTV, the pair will soon be recording a duet together entitled ‘Put It Up’.

If this report is accurate then it pretty much confirms Rihanna is dating still Chris Brown.