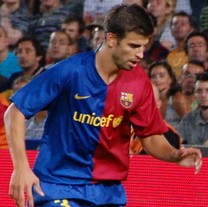 Question: Who is Shakira dating in 2013 if she has a boyfriend or if she is married, who is her husband?

Answer: Singer Shakira is currently dating Spanish professional soccer player Gerard Piqué with whom she recently had her first child.

Gerard Piqué who plays in the centre-back position for his club F.C. Barcelona and country Spain is exactly 10 years younger than girlfriend Shakira.

The couple first started their relationship in 2010 after meeting each other on a music video shoot.

It was during the filming of the video for Shakira’s official FIFA World Cup song ‘Waka Waka – This Time For Africa’ that the two first hit it off.

Then after months of speculation in March of 2011, the Colombian singer used Twitter and Facebook to officially announce that Gerard and herself were dating.

The couples first child was born in January, 2013 in Barcelona, Spain.