Question: Who is The Stig on the BBC show Top Gear?

Answer: In the British version of the popular motoring show Top Gear, producers are currently on their third Stig test driver. Here are their current known identities:

The first Stig who appeared on a total of 22 shows over the first two series (2002 to 2003) was former British Formula One driver but little known Perry McCarthy. As the original Stig, Perry was always dressed in a black helmet and racing overalls.

Black Stig’s onscreen exit saw him drive off the end of HMS Invincible’s aircraft carrier deck in a white, stripped out and tuned up Jaguar XJS. 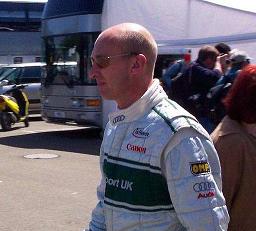 During his short time in F1, McCarthy attended a total of ten race meetings during the 1992 season. However mainly due to the fact he was driving for the new and totally uncompetitive Andrea Moda team, Perry was unable to even qualify for a single race.

The team didn’t even manage to complete one season in F1.

In the following episode after black Stigs exit we were introduced to the new white Stig. After working on the show from 2003 (Series 3) right up to 2010 (Series 15) this Stigs identity was finally revealed as active but still little known racing driver, Ben Collins.

This time though Top Gears producers had no intention of switching Stigs as part of any onscreen story line  Collins himself choose to announce his alter ego after years of being silenced.

This decision was much to the BBC’s dismay, after all they had spent years developing white Stig as a global brand. Worldwide you could buy t-shirts, books, CD’s etc displaying the famous TV personality.

Changing the Stig’s colour or getting rid of the character entirely simply wasn’t an option this time, they needed a quick and seamless replacement after sacking Collins for apparently breaking his contract terms.

Even during his years on Top Gear Ben Collins took part in multiple high level motor-racing formulas including Le Mans Series and the Aussie V8 Supercars.

After the exit of “Sacked Stig” Top Gears producers needed to replace Collins with a new driver but still keep the now iconic white suit and helmet. This was done in very creative manner at the end of the Top Gear Middle East Christmas Special.

The episode saw presenters Jeremy Clarkson, Richard Hammond and James May loosely retrace the journey made to Bethlehem by the Three Wise Men. This time though, three perhaps less than wise men discovered the baby Stig.

In the next show baby Stig had quickly grown up and was already in his full size white racing suit and helmet putting cars through their paces on the Top Gear test track.

At this current time though Stig the third’s identity remains a mystery and after what happened with Ben Collins, don’t expect the BBC to let that change anytime soon.

In order to protect the brand and avoid having to create anymore fancy story-lines don’t be surprised if the driver playing the Stig changes even from time to time without a word being said. Perhaps contracted to secrecy even after their employment finishes.