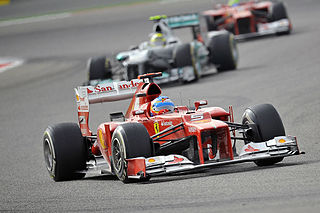 Question: Who won the Spanish Formula One race?

After only managing to qualify in 5th place on the grid, the Ferrari driver eventually claimed what appeared to be a fairly comfortable victory.

Partly due to an inferior tyre strategy, the current F1 Championship leader Sebastian Vettel was only able to manage fourth position.

The result gave Fernando Alonso his first win at the Barcelona circuit since joining the Ferrari team.