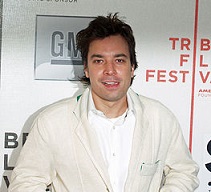 Question: Who will be the new host of The Tonight Show on NBC, replacing Jay Leno?

Answer: NBC have now officially confirmed Jay Leno will be replaced as host of The Tonight Show by Jimmy Fallon in the Spring of 2014.

Fallon is a comedian, presenter and actor most famous for hosting his own late-night talk show ‘Late Night with Jimmy Fallon’ which has aired on NBC since 2009.

Leno who wasn’t due to leave the flagship NBC talk show until September, 2014, first began hosting the show way back in 1992.

It’s believed as well as changing hosts in 2014, The Tonight Show will also switch filming locations from NBC Studios in California back to New York city.