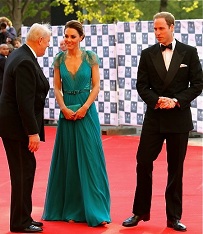 The Duke and Duchess of Cambridge – Photo from Jennifer Su

Question: When is Katherine Middleton’s due date for the royal baby?

Answer: According to an official palace spokesman, Kate is due to give birth to her and Williams first child sometime during July, 2013.

Prince William and Katherine Middleton, now known as the Duke and Duchess of Cambridge are set to move into Anmer Hall before Kate’s due date.

The couple have reportedly been having the Norfolk country homes security upgraded in preparation for the new arrival.

Anmer previously played home to the Duke and Duchess of Kent during the 70’s and 80’s.

It’s believed the royal couple don’t currently know whether their baby will be a boy or a girl.