Let’s start this review with the basics, iRacing is an online motor racing sim for the PC.

iRacing is a subscription based service where you pay a monthly fee to race online against other people from around the world, when you first subscribe you can download the basic package which includes a number of tracks and cars.

If you wish, you can then download more cars and tracks, paying an additional fee for each. It was launched in 2008 and is constantly being updated and improved. In August 2011 they released their biggest and long awaited update, iRacing 2.0 and it is this latest version which we will be reviewing here.

The biggest change included in the 2.0 update was the long awaited new tyre model which basically gives an even more realistic feel to the handling and now means the tyres wear and lose grip more over the course of a race.

iRacing is classed as a hardcore racing sim due to the fact that the car’s physics and handling are extremely realistic and are currently as close to real world racing car handling as you can get in any sim. This is one of iRacing’s biggest selling points and one of the things they pride themselves on.

If your used to playing racing games such as Need For Speed or even Gran Turismo you will have a bit of a shock the first time you get to a corner in iRacing. Unlike in most racing games and sim’s, if you come into a corner too fast or without the car well under control you are not going to be able to quickly scrub the speed off or regain control with the help of some overly generous driver aids.

Although they have just added some driver aids to the options for the first time they kind of defeat the point of the sim and may take away from the challenge and satisfaction slightly. In any case they are only minor aids and are unlikely to get used by most members.

While these extremely realistic and unforgiving sim handling physics may prove a little frustrating in the beginning, it makes it all the more fun and satisfying when you do eventually get to grips with it. It’s nice to know that if you can handle a particular car well in iRacing you wouldn’t do too bad if you drove it in real life such is the level of realism.

Now due to this realism and how tricky the racing cars are to drive, using a gamepad as a controller simply isn’t an option. Although it may be technically possible it makes it way too hard to drive due to the lack of range of motion in the steering, accelerating and braking inputs.

iRacing is designed only to but used with a steering wheel and pedal set-up as this not only makes the driving experience far more realistic and immersive, it also gives you much greater control over the car allowing you to make more precise adjustments to the steering etc. 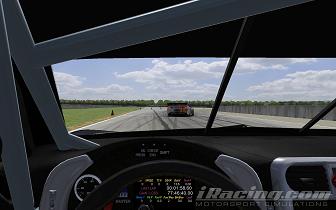 Now as I mentioned, to use iRacing you need to subscribe and when you do you get given 6 cars and 9 tracks which has increased from what you got a year or two ago. These include race cars and tracks for oval and normal circuit racing. In the early years they were very much focused on the American market with almost exclusively US cars and tracks on offer.

Thankfully nowadays they also offer a good selection of tracks and cars from around the world including a Williams F1 car and a number of F1 tracks such as Spa and Suzuka.

To purchase extra tracks generally costs around $14.95 and cars are usually $11.95. Now when you add this to a subscription cost of between $7.50 and $12.00 per month depending how long you pay for at a time, you can be forgiven for wondering why it costs so much.

Well firstly each track is actually laser scanned in the real world on location in order to create an incredibly accurate virtual model of the track. They are apparently accurate to within 2 mm so it will recreate every little bump and dip in the track as well as give the right dimensions and elevation changes.

The cars are also laser scanned plus the sim developers work with the real world racing teams in order to get the performance and handling characteristics as close as possible to the real car.

So apart from the high levels of realism in iRacing its one other big selling point is the actual online racing competition among its members. They run proper race series that can run for months, some of which are sanctioned by real world motor sport race series such as NASCAR and Grand-Am.

This means the competition can be quite intense and there are a lot of serious racers online here. Don’t worry however though if your not a world class driver as there are a number of lower level races for other drivers.

It is a fact though that the general standard of drivers who race here is rather high so if you’ve been used to racing against AI in other games and sim’s and regularly winning races you may be in for a reality check. It is very hard to win races on iRacing, especially at the middle and higher licence levels. It can be a dent to the ego at first but as long as you race against some people of similar skill levels you should still have lots of fun.

iRacing uses a license system based on your safety rating in the sim. During races and other official sessions you gain or lose points for avoiding or getting involved in incidents like going off track or making contact with another car.

This is probably the one part of iRacing that can cause a lot of frustration in certain situations. For example, if someone crashes into your car through no fault of your own you will still lose safety rating points. This is due to the software not always being able to determine who’s fault the contact was so it penalises both drivers.

As annoying as this may be it does kind of reflect real world racing which is not always fair plus I think the system is necessary to keep out idiots who just want to drive crazy and reckless. So although it could do with a little bit of fine tuning I believe that overall it is a good feature and is unique in the online racing world.

To sum up this review, if you are looking for the most realistic racing experience possible or want great online racing competition and don’t mind paying a little extra to get the best then iRacing is the only real option. Although it isn’t cheap you really do get what you pay for, the cars and tracks are the best you’ll find in any sim or game.

It would be nice to see the addition of AI in the future for practice purposes and so you can choose exactly what car you want to race on what track and at what time rather than having to sick with the scheduled races all the time. Some races can also be a little on the long side, regularly lasting for over 45 minutes in the higher licence levels which may not be for everyone but does add to the challenge.

Generally though, if your a casual racer who likes to have a quick race for a few minutes here and there then iRacing may not be for you. However if your a frustrated racing driver who always wanted to take part in real motor sport but couldn’t afford it then I think iRacing may be just what your looking for.